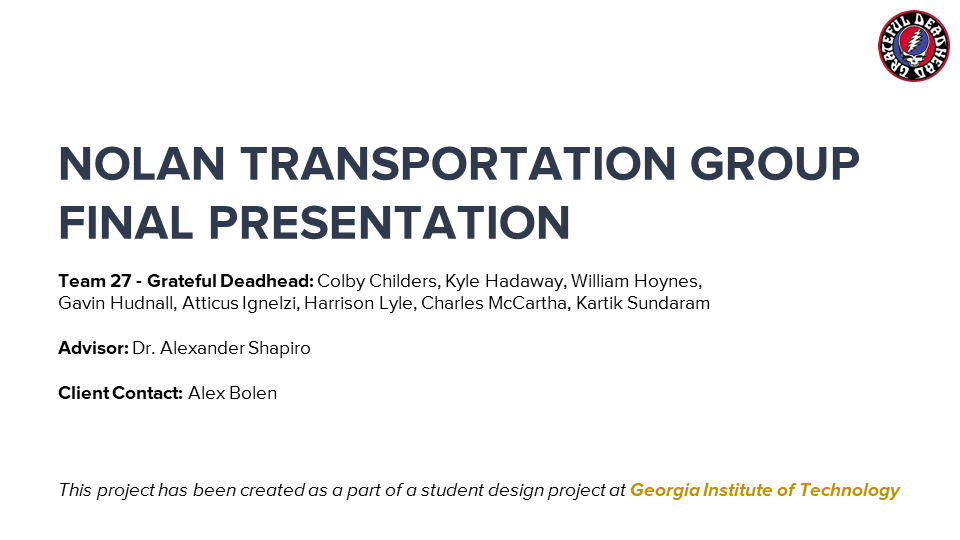 Founded in 2005, Nolan Transportation Group (NTG) is a logistics company based out of Atlanta, GA that acts as a third-party for shipping goods throughout the U.S., Canada, and Mexico. More specifically, they are a third-party logistics (3PL) service that connects customers to carriers on a large scale. They currently have over 1500 employees spread across 11 sales offices and have a three year growth rate of 315%. The majority of the 1500 employees are freight and carrier sales brokers. These brokers currently have no communication amongst each other to match up lanes, resulting in suboptimal carrier rates. This communication gap spans between NTG offices nationwide as well as intra-office. Customers like Coca-Cola will call in a contracted load, NTG then has 24 hours to book a pickup and delivery date/time.

The objective of this project has two main parts. First, to establish a methodology and optimization model to determine potential lane matches with minimal deadhead miles. Second, to provide brokers with more information about their routes and facilitate communication with other brokers to implement the matches through a dashboard tool.

The strategy was to create an optimization model to maximize the number of lane matches. The optimization model is a mixed-integer program that outputs all feasible lane matches for contracted lanes. The model inputs are the distance matrix, the distance between one lane’s drop-off location and another lane’s pickup location, and the required equipment type for a load. The two primary constraints are no more than 50 miles of deadhead distance between drop-off and pickup locations, and matching equipment types for a lane and its backhaul(s). To estimate the monetary value to the client, a cost optimization model was created that maximizes the total estimated cost savings while ensuring each shipment is matched with at most one backhaul.  The scope of this optimization model is limited to the feasible matches found in the previous optimization model, which makes it computationally efficient.

An interactive Tableau dashboard has been delivered to NTG that displays all current possible contracted lane routes, or lane matches. Lane matches are derived from the optimization model they have also received, running in Python, constrained by the maximum allowed deadhead distance between the delivery of the first lane and the pickup of the final lane in the matching sequence along with the maximum allowed deadhead distance between the pickup of the first lane and the delivery of the final lane. The written model outputs a feasible solution with the highest number of matches, allowing NTG brokers to choose as many options as possible. This provides them with general recommendations to choose from, which can be narrowed down based on customers’ specific needs.

When the lane matches are provided to the brokers, they are ranked in order of how frequently the shipments are run and in ascending order of current margin, which allows the broker to easily identify the opportunities with the most value. When looking at lanes that fall within the definition of a contract that is running in March, the model found 589 matches for two-city routes and 3073 matches for three-city routes. The optimization model calculates the feasible matchings along with associated cost savings with the match and is outputting an estimated potential cost savings of $585,000/month for NTG. The final dashboard offers a streamlined and efficient visualization that conveniently displays all the opportunities that exist for contracted lane matches, with the more favorable matches showing first. This gives NTG the ability to approach the carriers more strategically by offering packaged lanes that benefit all parties involved. Overall this gives the brokers a better approach to their process, even though not all matches will be utilized. For each lane package that is successfully sold to a carrier, both relationships with carriers and customers are improved, while simultaneously increasing NTG’s margin each time the lane runs.